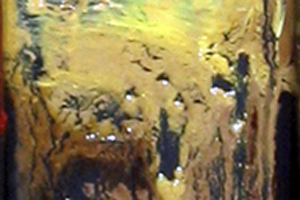 A Notable Review by a Notable Art Critic

An art expert’s insightful musings on an exhibit featuring
mixed-media works by an almost-renowned artist
whose dubious repute is only slightly worse than that of the art expert.

Not since the stunning works of the Lascaux Paleolithic cave paintings that were accidentally found in 1940 near Montignac, France, has art of this caliber been revealed to the public at large. Although the individual works in this show are not quite as big as the images found at Lascaux, nor as high off the ground, they are no less breathtaking in their scope and magnitude of conceptualization. The only other piece of comparable significance that I can think of was a small scribble I happened to notice in an empty lot somewhere on the Lower East Side of Manhattan back in 1972. But, as often happens with great works of art, the sanitation people have since removed it. Regardless, it is my humble opinion that the overall contribution of the “Melting World” series of works to the world of art and civilization as a whole cannot be underestimated.

The benefactors and presenters of this exhibit (some of whom are in the Witness Protection Program) eagerly anticipate your response to this most marvelous of occasions. With expectations running high, I am certain that you will be transported into ecstatic realms by the spectacular quality and deep meaning embodied within this new body of work, which took several years to complete, and several more years for me to write the extensive commentary for your benefit.

It is particularly interesting to note that some of the images in this exhibition are strikingly similar in feel and composition to works of the early Renaissance period, while other pieces are reminiscent of contemporary art videos, or more precisely, Balinese television programs.

I am deeply honored and humbled to have been asked to participate in the production of the Melting World exhibit and its corresponding marketing venues even given my unquestioned status as a notable personage.

What a delightful thing is the conversation of specialists! One understands absolutely nothing and it’s charming.
~ Edgar Degas

This first work in “Self-Judgement,” the latest series by the artist currently known as Aaack! (he changes his name every leap year), conveys an enormous amount of emotional complexity elicited by the simple act of feeding his cat.

A more complete impression of the artist’s emotional stability, strength, and utter confidence in his doubts is undeniable in this particular piece of the series.

The discerning use of color allows the viewer to concentrate more precisely on the hidden meaning of the piece as a mnemonic device.

Avoiding the use of color allows the viewer to concentrate more precisely on the hidden meaning of the piece as a mnemonic device.

The layered depth and magnetism of this piece is the result of long periods of silence while in a fetal position in the corner of a dark room with thumb in mouth. And as such, it would be best appreciated under similar conditions and position.

The next piece in the series addresses the ennui of the current global zeitgeist that can only be fully appreciated while cleaning the cat’s litter box.

Having lost his moral compass at a young age, residual memories of the artist’s past lives found their way into this work via the incoherent ramblings of trolls on the internet. In fact, this piece was conceived while trolling.

Through a combination of extrasensory perception and Elliot Wave Theory, this piece depicts the price of gold in an indistinct future. Of course, there may be no one around to appreciate it, but if there were, that would be the price.

The metaphysical implications embodied in this piece will allow the viewer to delve deeper into the ever-persistent question of “Why am I here?” Or, more precisely, “Why am I here looking at this stuff?”

This piece explores the transcendental implications of transendentistry.

Critical thought played no part in the creation of this piece. Therefore it is sublimely important, and will surely appreciate in value over time.

Using a combination of mixed-media and shock therapy, this piece explores the inescapable vortex of a viewer’s effect as it slowly sinks past the Event Horizon.

Using an infinite combination of transfigured mutations and robust syncretic-metaphorical sociopolitical and religious symbolism, this piece unique accentuates the discordant polarity of the average consumer’s subconscious mind while trying to decide what type of coffee to order for someone who is not present.

There is nothing meaningful nor meaningless in the juxtaposition of the figures in this piece – irrespective of the fact that there are no figures being depicted.

This piece is a conceptual 3½ minute video. Please wait for it to start.
[/one_half]

Editor’s Notes:
Art Twerks wishes to inform you that, regretfully, all the original enamel-pan-and-oil pieces in the “Melting World” exhibit were destroyed when the hired catering staff mistook them for dirty steam trays, hauled them off after the opening reception, and had them wiped clean. We sincerely wish the artist better luck in his next exhibition.

P.S. It may be possible in the future to purchase original pigment prints of the above image. Interested parties are welcome to contact Art Twerks for availability.