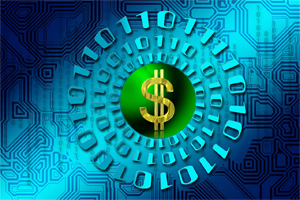 Yes, you got that right. Mr. Wowey has put together a high-powered stable of crypto NFT artists from around the globe—the likes of whom have never been seen before. In fact, they cannot be seen. And neither can their artworks.

In order to help facilitate this new venture, Mr. Wowey has opened the first ever crypto gallery. The entry passkey that allows entrance to the new “space” in space is available to vetted collectors for a mere $1 million US—a veritable bargain for such a golden opportunity.

When Mr. Wowey was asked by a recent client why he was unable to see the art he purchased, Mr. Wowey responded, “Well, it wouldn’t be crypto art if you could see it. Would it? But just imagine the astronomical value it can accrue just sitting in your virtual crypto art gallery, somewhere out there in the cloud.” We suspect it may not be too dissimilar to the “cloud-cuckoo-land” mentioned in Aristophanes’ ancient Greek play The Birds.

In the meantime, “Othacoin” founder Curran C. Quest was thrilled to learn of Mr. Wowey’s contribution to the advancement of the virtual imaginary digital currency exchange movement that is taking hold with the people who really matter.

One of Mr. Wowey’s steady clients, billionaire collector M. Holden DeBague III, let it slip that he has become an avid admirer of crypto artworks and has already used some of his bitcoin stash (that he has yet to actually see) to add several new pieces to his offshore freeport collection, which includes works by other Consumerist Movement notables such as Middlehorn, Koons, Rumpp, and Hirst, just to name a few.

No doubt this new direction in hyper-costly art will set the bar higher for those seeking to make a name for themselves as serious procurers of inflated status among their like-minded peers.

So there you have it, ladies and gentlemen of refined taste. This is the brave new world of art and art marketing at its most profound level, brought to you by a person so deep and profound himself that billionaires, oligarchs, and other collectors of investment-grade artworks are already clamoring to be a part of the revolutionary crypto-world culture.

Now you see it, now you don’t!