RobArt the Robot Artist to the Rescue

Avid inventor and genius sushi artist Siseko Yumaki of Japan has invented a powerful tool for artists who are too busy making a living doing other things.

Yes, an AI (artificial intelligence) unit so powerful and deft that it will be difficult for humans to compete with it at the various Art Babels, Biennials, and Triennials. Perhaps even at the Olympics?

With financial backing from unverified venture capitalists and help from a couple of silent partners, Mr. Yumaki has formed a high-tech robotics company aptly named YuRobArt that will eventually manufacture his art robot units for eventual lease or sale to the general public.

Undisclosed sources have revealed that a couple of beta units are already in operational use and that their works have been stealthily placed on exhibit in several prestigious galleries. The finished works are signed with aliases in order to evaluate the reaction of dealers, art critics, and the viewing public.

Our sources also say that these artistic robot units are not your usual clunky type of machinery. The internal working components and flexible exoskeleton are so refined that you might mistake them for a typical unpaid undergrad studio assistant. 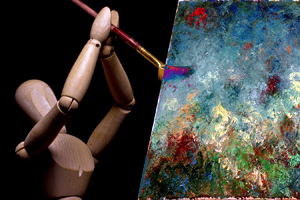 Unofficial representation of a robot artist at work

According to Mr. Yumaki, his creation, which he has named RobArt, has the ability to do your work as you would, in your preferred style, except better and faster. Whether it is a commercial illustration project or a fine art portrait for a foreign oligarch, RobArt can handle the job.

The possibilities are endless. Need an exact copy of a museum piece you’ve been dying to own? No problem. RobArt can make an exact copy for you. Want a giant-size shiny metal replica of your cat or puppy dog? RobArt can do that too. RobArt is so versatile it can even come up with its own conceptual art. Imagine that!

AI Art. For when you don’t have time to think for yourself. ~ Z. Nil

Your RobArt unit can work in just about any medium and scale, from microscopic to leviathan. For the larger works, you can purchase optional accessories, such as longer body parts and even a special lithium-powered ultra-powerful beanie-copter to help your RobArt hover about, creating that massive tin-foil statue of your mother-in-law for her next birthday. (Won’t she be thrilled?)

Although the YuRobArt company has not released any images of their groundbreaking product, we are told that the first planned RobArt units will be difficult to distinguish from actual humans. For the time being, the first units to be built will only come in gender-neutral models. However, Mr. Yumaki teasingly hints that future models will be available in all sexes and colors to suit your creative needs.

Finally, the folks at YuRobArt wish to remind future customers that after every project is completed, remember to shower your RobArt with lavish praise. After all, robots have feelings too!