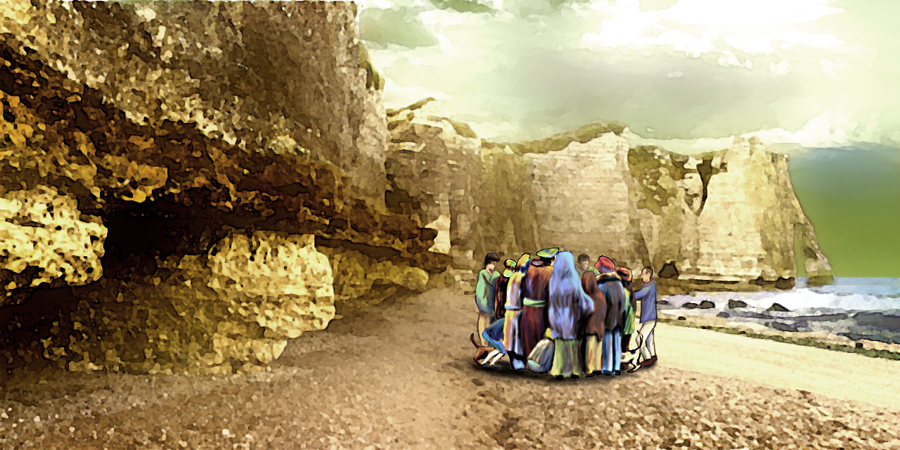 The body lay where it was cast.
A small crowd clustered around it.

“Oh, the poor sea-drowned one,” they wailed in unison.

The seagulls joined the mournful choir, adding their plaintive cries. The dirge echoed among the cliffs in the chilly morning air.

Dark clouds roiled above the churning waves, remnants of the night’s storm. No one dared remove the seaweed shroud from the figure—a regal green robe, an ironic gift from the sea to protect the modesty of the otherwise naked corpse.

I watched from a distance as an agitated balding man—no doubt one of the elders—hurriedly approached the group. He struggled to catch his breath after the climb down to the pebbled beach.

“What are you all doing here?” he demanded. “Our laws forbid this!”

No one responded. They stared at the victim. The elder pushed his way through and stood by the lifeless form.

From my sheltered crevice midway up the cliffs, I had seen a young boy, furtively playing along the misty shore when he came across the body. Up the hill he scurried. Soon, a dozen men clambered down the craggy hillside to the shore, some trailed by their wives and a few children. Dogs, too, ran in pursuit. The world must have appeared quite different to them at sea level. For a few moments, they all seemed to stand frozen at the sight of the menacing expanse before them. It was not until the dogs sniffed and barked their way toward the body through the small forest of legs that the crowd returned its attention to the matter at hand.

The old man continued to rebuke the villagers for their disregard of their ancient law against going down to the sea. Life for them was above the cliffs. In the wooded range and lovely farmlands safely away from the capricious sea, there was no need to risk its perils. Only the unknown lay there. A sudden surge of a large swell could smash one against the sharp boulders that jutted from the water like foamy bared teeth. Before them lay visible proof.

“Oh, the poor sea-drowned one!” they cried.

I came forward among them.

Silence came over the gathering. One by one they gazed up at me, eyeing my wooden staff, simple clothing, and felt hat.

“What seems to be the trouble?” I asked.

The elder frowned in suspicion. “Who are you, and what business is this of yours?”

“I am a humble traveler from a distant region,” I replied. “Merely resting before I continue on my journey. Can I be of help?”

“Oh, the poor sea-drowned one!” lamented the others.

A heated debate ensued among the men. What to do with the body? The victim was not one of their kind. The women chimed in. Children raced on the beach. Dogs barked and lurched at the waves, as squawking seagulls dove over their heads.

While the mob was distracted, I quietly inspected the deceased. It was all just as I thought.

After a time the men, women, children, and dogs tired of their doings and quieted down.

“If you will allow me, I have some experience in these matters,” I said. “Since this situation is in conflict with your law and has caused you great anxiety, I propose a solution: that, as a foreigner and a neutral party, you allow me to oversee the necessary rites and disposition of the departed. But I will need your help with the preparations.”

This initiated another, but more brief, dispute.

Then the elder turned to me and nodded gravely. “We accept your offer, kind sir.”

I immediately set them to tasks to be completed forthwith. They chattered with relief, as off they went, back up the cliffside to carry out my instructions. The excitement among them was palpable. The responsibility was off their shoulders.

Within an hour, a group of villagers returned with the various items I had requested. They placed these upon a sturdy wooden bench they had brought. Soon after, another group brought down dry firewood and erected a pyre.

The elder lit the fire. All stood round and watched the flames as I chanted phrases they did not comprehend. When the embers were glowing hot, I instructed some of the men to place the deceased, seaweed and all, onto the pyre.

The corpse burned slowly, enveloped in smoke. There was nothing else for them to do.

“Go now to your homes in peace,” I said. “Rest assured all will be well.”

It was mid-afternoon, and the sky had cleared when the last of them disappeared over the top of the steep cliffs.

One last thing remained for me to do before I continued on my way. I neatly arranged the sacrificial offerings upon the wide bench and waited. When some time had passed and the flames had subsided, I sat among the offerings and gave thanks for the bounteous meal of fresh vegetables, fruit, bread, and the large roasted fish with seaweed garnish.