It was a shocking scene at the auction house. Minutes after the gavel had come down for the last time on the final bid, the large painting that hung on the wall, titled “Moldy Loaf,” suddenly began to disintegrate and slowly crumbled to the floor.

“How could this be?” shouted the auctioneer. “This wasn’t one of Banksy’s works!”

The artist, known as “Fridge”, stood silent in a corner near the hallway that led to the restrooms. Ladies’ on the left, Men’s on the right, just past the water fountain.

Everyone turned to look. Perhaps the artist would give some sort of clue as to what had just happened. All they got was a faint, impassive hum.

The sad thing about artificial intelligence is that it lacks artifice and therefore intelligence. ~ Jean Baudrillard

The stunned buyer, who was in the front row, soon became infuriated. He leapt from his seat and within seconds was pummeling the artist with his fists. Fridge did not budge, nor show any sympathy for the man who had just forfeited the $1.25 million dollars he had pledged for the artwork. After all, Fridge was a refrigerator.

To save the auction house from any further embarrassment, the art collector—whose name was not disclosed—was quickly whisked away by house security. Shaken, the audience mumbled among themselves. How could this be? What is that strange odor? Why didn’t they serve wine?

The artist’s agent was called to the podium to explain what had transpired. 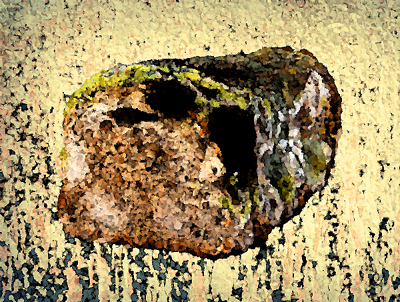 The agent, Mr. Harold Hashtag, explained that the artist had used an actual loaf of old bread to create the masterpiece. Needless to say, mold is not a stable substance. So it was expected the work would decompose over time. It was part of the artist’s concept to illustrate the transience of worldly existence. They just didn’t expect it to make the point so soon. The work had likely undergone an accelerated deconstruction process due to the build-up of humidity from the large crowd. But now it was gone. Pfft! Finis! Kaput! Modern art at its ephemeral best.

Mr. Hashtag went on to say that Fridge’s genius was undisputed. His client’s operating system was an A.I. program so advanced that it was able to conceive the idea of making a work of art out of mold, mycelium fungus, and bacteria. A living breathing life form.

Many a politician relies on artificial intelligence. ~ Z. Nil

Much to the astonishment of the auction house, the event, which was streamed live via the internet, caused a sensation online as electronic bids continued to pour in. It was soon realized that the prospective buyers were other AI units who continued to bid up the price of the piece even after “Moldy Loaf” disintegrated. Its value soon reached infinity.

The room emptied quickly, however, as human collectors and investors flocked toward the doors, holding their noses—and thus demonstrating their sad limitations.

Alas, ladies and gentlemen, the era of mortal artists creating work for sentient humans seems to be drawing to a close. We are, as Fridge so poignantly points out, naught but moldy bread. Speaking on the QT, several collectors who are AIs themselves assure us not to worry. Artificial Intelligence will soon have everything under control!