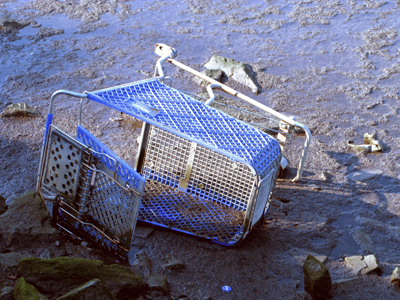 The word is out! The Cart Art series by the man known to his peripatetic acquaintances as “Slump” is being hailed by street vendors everywhere as a major tour de force.

Not unlike Marcel Duchamp, Slump uses ready-made objects as a medium to express his sociopolitical views. He is most known for his public art installations incorporating discarded hi-tech electronics, household items, and road-kill. The former hedge fund manager turned social activist and artist originally wanted to title his latest series Cart People—an obvious homage to his favorite B-movie, Cat People—but was concerned the general public would conflate it as having to do specifically with the indigenous homeless population.

“On the contrary,” Slump stated, “in this series, I decided to symbolically replace people with shopping carts to highlight our consumerist society. Although this theme has been addressed before in different ways, I felt the use of empty shopping carts, or trolleys, refers to the insatiable appetite for something new that soon becomes old, discarded, only to feel empty again. I mean, when was the last time you went shopping and all the carts were already full? You know what I’m saying?”

Um, not really. But let us move on…

Yes, shopping carts, the preferred method of cartage for the homeless elite. In this new series, the shopping carts represent the common person. For uncommon folk the artist prefers to use empty beer cans or wine cartons.

Due to the enthusiastic encouragement by many towns and communities for the artist to keep moving, he has lived in more places than he otherwise would have, given a choice. Because of this unsolicited prodding, his work can be found throughout the country, as he is never in one locale for too long. On being homeless, Slump says it wasn’t his preferred choice, but “Many people have a house, few have a home.”

Civilization is the limitless multiplication of unnecessary necessities. ~ Mark Twain

Earlier in his career—during his Ad-Man period—Slump distributed dozens of handmade sandwich boards around town that had his artwork nailed or glued onto them. These he cleverly placed in front of restaurants, art galleries, and museums, where people entering and exiting couldn’t help but almost fall over his art. In fact, some people did fall over them. Although ephemeral in nature, they left a lasting impression. Especially on the owners of shops who were sued by injured patrons. Once again, the artist had to quickly move on.

With the eye of a Hollywood director, Slump positions his “cart people” characters at just the right places for maximum effect. 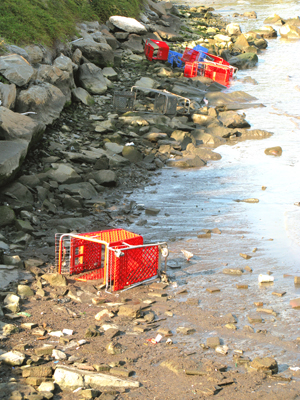 Sunbathers On The Rocks

Despite all his travails, the artist takes heart in the small everyday kindnesses some strangers proffer upon him. Motivational encouragements like Get a job, you bum, or the ever-helpful, You take care of yourself, now. Y’hear?

But recently the dark clouds over his head have begun to show a bit of silver lining, as Slump’s works have caught the eye of several discerning art dealers who wish to remain anonymous for the time being while they put together their scheme, or rather, their plan on how to make him the next big thing to hit the art world—and the wallets of their “curated” collectors. As indeed, a stable of rich and pliable collectors is much more valuable than any stable of artists. But hasn’t that always been the case?

Making money is art, and working is art, and good business is the best art. ~ Andy Warhol

Ending on an exciting note, there are hushed rumors flying about that Mr. Slump may be invited to the White House for Thanksgiving, and even be commissioned to make a shopping cart installation around the national Christmas tree. The only stipulation being that the carts be covered in artificial gold leaf and bear the president’s personal brand name. 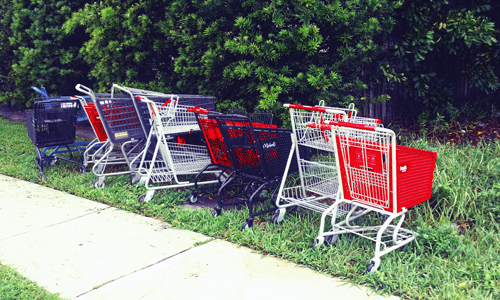 Looking to the future, Slump envisions a new social order emerging: Large groups of the homeless as organized nomadic tribes roaming freely, in contrast to the trapped urban city-dwellers who are slaves to home delivery systems.