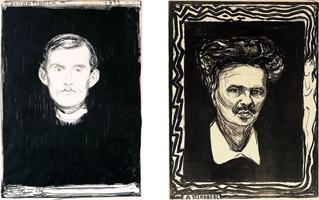 We could go on for quite a bit about beautiful modern Scandinavian and Nordic art, architecture, and furniture design, not to mention the wonderful culture. For this article, however, we have decided to focus on two influential giants of a past era, the artist Edvard Munch and the playwright and painter Johan August Strindberg.

Although this article was originally intended to be an intensely interesting dialogue between the two Scandinavians, it was brought to our attention that these gentlemen are currently not speaking to each other. Not so much because they are deceased—we can get around that minor detail—but more due to their falling out while they were still alive.

Our Art Twerks team in the Spiritualist Department did their best to facilitate a reconciliation between the two artists, but to no avail. Sadly, neither one would agree to joining in one of our Art Twerks world-renowned Artist Dialogues. So, since we couldn’t get them together, we have decided to write a little something about them anyway. Especially given their important contributions to the broader dialogue of art, and possibly even Scandinavian culinary tastes…we think. 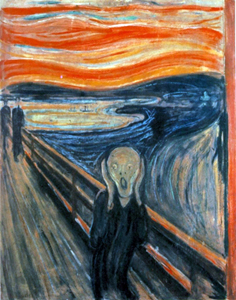 “The Scream” by Edvard Munch

In helping us to understand the psyche of these two giants of Scandinavian art, we’ve chosen an image from each whose essence, we feel, captures the artists personal ideology. Our intention is not to offer an in-depth study of the men and their work, as this is readily available on the internet and in libraries (remember them?). Instead, we wish to touch lightly upon the subject in order to, hopefully, pique your interest in their art, and to offer a slightly different perspective. The unique Art Twerks perspective, that is.

With questionable certainty, our in-house art experts feel that the psychological impact of this work has been etched deep into the psyche of many a seasoned hedge-fund manager, stock investor, and commodities trader.

It is a painting that offers many questions. Was it a personal cry for help by the artist or a symbolic representation of the financial Panic of 1884? Yes, the very same event that ruined stockbroker-turned-artist Paul Gauguin.

What is economics? A science invented by the upper class in order to acquire the fruits of the labor of the underclass. ~ August Strindberg

Looking at Munch’s painting, one may also ask, Who are those figures following the screaming person? Questionable friends? Debt collectors? Or merely people viewing the strange landscape he has painted?

Ah, yes. That distant landscape. It almost appears that Munch has depicted a shallow Double Top price chart formation. A chart formation that would almost certainly have foreshadowed the aforementioned market crash. If only Gauguin had been aware of these patterns of perceptive prognostication, he might have kept his money and been spared the trouble of traveling halfway around the world to paint bare-breasted women.

All these elements only add to the mysterious quality of “The Scream.” Munch obviously has captured the ineffable zeitgeist of the financial markets during those times.

I sense a scream passing through nature. I painted…the clouds as actual blood. The color shrieked.
~ Edvard Munch

As of this writing, the current markets are screaming upward—some say forever. Only time will tell when the reality of market gravity will hit. Perhaps then, some other aspiring artist will try to capture “The Scream” in some new and creative fashion.

The Norwegian artist Edvard Munch made at least four versions of this theme that he, in German, called Der Schrei der Natur—the Scream of Nature. In fact it was rumored that his neighbors often complained to Mr. Munch about his screaming while working on the painting. When confronted, Mr. Munch claimed that it was his way of getting into the mood. Regardless, this did not go over well with the neighbors.

A very loud scream was also the reaction of famed German art critic Bertholdt Schanzganger when he first saw a version of “The Scream.” When asked the reason for such a visceral reaction, he responded by saying, “I always get into an artverk by expressing the emotion that the artist was trying to convey. For example, when viewing a Pieta, I allow myself to become doleful and weep uncontrollably. In front of a Schiele nude, I do other things. You get the idea—getting into the artverk. Ya?

Happiness consumes itself like a flame. It cannot burn forever, it must go out, and the presentiment of its end destroys it at its very peak. ~ August Strindberg

For a different take on the painting, noted Swiss psychiatrist and ski-hat knitter Ludvig Schmetz has said of the piece that “It may be Munch’s way of coping with the repressed psychological trauma of having been acquainted with August Strindberg.”

The two artists had met in Berlin near the end of the nineteenth century and were friends for a brief period, but it was downhill from there. It may have been that, in the end, they just didn’t get each other’s philosophy on art and investing.

Without fear and disease, my life would be like a boat without oars. ~ Edvard Munch

In Strindberg’s 1894 painting “Seascape,” we can clearly see that he was acquainted with the various chart formations found in nature. This particular painting prominently features a Head and Shoulders Formation in the clouds. This work also exhibits the prototypical fusion of the spiritual with the financial. In some ways, August Strindberg would have made a great guru or hedge fund manager.

As a side note, we should point out that Strindberg did meet Paul Gauguin in Paris in the 1890s, with pretty much the same effect he had on Munch, as mentioned above. It appears that meeting Strindberg depressed Gauguin more than the entire financial depression that lasted from 1882 until 1885. Gauguin was never the same again. He gave up being a stock broker and thus the opportunity to help society in a truly meaningful way. So sad.

What people call success is only preparation for the next failure. ~ August Strindberg

August Strindberg was also considered at the time to have an anti-establishment bent, which people thought exhibited itself not only in his writings but also in his dark gray and stormy paintings, and his rather odd splayed-brush of a mustache. And after commenting that people should not keep dogs for protection but instead do their own biting, it was thought perhaps he was referring to some kind of performance art. This was definitely stretching the boundaries of Swedish civil society in his day.

Since the majority of August Strindberg’s output was literary we will leave that analysis for a possible future article.

In the meantime, we at Art Twerks hope that you have found this comparison of Munch and Strindberg—with a mention of Gauguin thrown in—to have been enlightening and entertaining.

Until next time, keep your spirits up!

Disclaimer:
The conversation presented in this post is totally fictitious – partly because it is between deceased persons – and is meant for entertainment purposes only. Art Twerks makes no claims or guarantees as to the accuracy of any elements included in the post. In addition, no offense is intended toward the dearly departed and/or their descendants. And as far as we know, no animals or investment portfolios were hurt in the development of this post.

Notes:
Much information is out there dealing with our Art Twerks Dialogues guests please avail yourself of it while we still have a free internet. As an example, for scholarly works, there is August Strindberg: A Life and Edvard Munch: Behind the Scream, both by Sue Prideaux. And for more lighter fare, there is always this: Strindberg and Helium.