A Spy’s Eye for Art 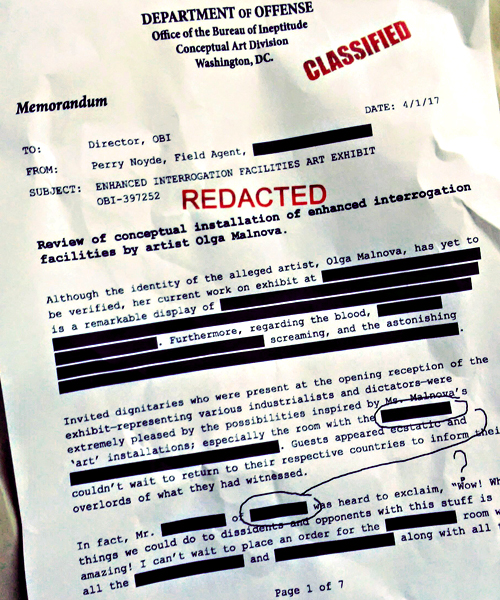 Leaked Review of a Review Memorandum

Former US intelligence officer-turned-art-critic, Perry Noyde (not his real name), has released via leaked memo his classified review of an exhibit by former rival spy and mediocre karaoke singer, Olga Malnova (not yet sure if it’s her real name).

From what we can discern from reading what has been left visible in Mr. Noyde’s heavily redacted memorandum, he manages to capture an accurate rendition (no pun intended) of the emotions elicited from visitors to Ms. Malnova’s art installation of her conceptualized interrogation rooms of the future. To whet the appetite of the invited guests, the exhibit included some live demonstrations of the various installations. 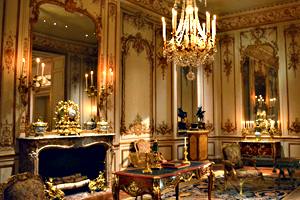 Designed with the comfort of the interrogators in mind, Ms. Malnova’s refined sense of décor and utility straddles the aesthetics of Rococo gaudiness with the simplicity and practicality of an Inquisition dungeon. In keeping with good taste, the more elaborate rooms in the exhibit are furnished with heavy drapery that do wonders to cover some of the terrible unpleasantness hidden behind them. Pay no attention to those men behind the curtain, darling.

Invitees are urged to try out all the various instruments, er, furnishings, of this sumptuous thought-liberating center where detainees of the future will beg to tell their interrogators everything they know, whether factual or not.

Depending on how well the concept is received by various interested governments (which shall remain anonymous), Ms. Malnova is contemplating offering manufactured replicas of her facility designs to interested parties.

The most innocent man’s words will be used against him. ~ Kenneth Eade, The Spy Files

As far as pricing is concerned, Mr. Noyde’s intel estimates a brief stay at one of these superb facilities could set a “guest” back a few bitcoins, depending on how much their family can afford and the duration of the stay. In addition, eschewing room service, and forgoing regular meals will help keep costs at an affordable level.

According to Mr. Noyde, this exhibit will hold you captivated and screaming for more.