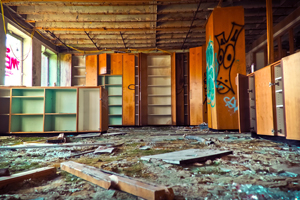 It has come to our attention that, some months ago, many valuable artworks and artifacts that were originally plundered from collections and ancient sites worldwide have gone missing. The stolen artworks and relics were kept in a clandestine warehouse for safe storage prior to being fenced to unscrupulous dealers and collectors. The enormous cache of irreplaceable works stored at the secret facility was under 24-hour surveillance by second-hand automated shopping-mall security equipment.

The daring heist came to light only recently, with the help of a brave and conscientious whistle-blower who is now in hiding in the Witness Protection Program. (Have any new neighbors appeared suddenly on your street?) Police say that the suspects in the theft include previous suspects from previous thefts involving previously stolen artworks. It is not yet certain if these very same previously known thieves are working for themselves or for previous client(s).

There is too much talk and gossip; pictures are apparently made, like stock-market prices, by competition of people eager for profits…
All this traffic sharpens our intelligence and falsifies our judgment. ~ Edgar Degas

We are told that the stolen artworks held in the facility range from archaeological treasures to contemporary pieces, some of which were conceptual in nature. Apparently, none of the conceptual works were taken. In fact, when police authorities conducting the investigation came upon the conceptual works, they were under the impression that the robbers had strewn rubbish about in order to cover their tracks.

Unfortunately, due to the age and condition of the security equipment at the storage facility, only partial and somewhat degraded images of the theft were caught on video. According to police sources, the video showed that the perpetrators were dressed in dark, loose clothing, hats, and masks to disguise their size and identities. We were not told how many persons participated in the robbery, although we were informed that one of them did appear to be extremely short with a bushy tail.

Since the company that owns the secret facility is a shell company shielded by yet another shell company registered in the Cayman Islands, the owners could not be immediately identified or located to comment on this piece. The authorities are presently actively searching for them. Sources familiar with the case did suggest, however, that they believe the owners might have ties to underworld figures. It was pointed out to us that this might complicate the investigation, especially if “representatives” of the warehouse owners were to find the thieves before the police do.

When interviewed by the police regarding the theft, the manager of the secret warehouse denied knowing it was a secret facility. He was under the impression that everyone knew where the building was. “How could it be secret? It’s right in the middle o’ town, and it ain’t invisible,” he said. The manager, Mr. Marty Fezzel, claimed that he had been working there for the past six years and that he was hired by a kindly old gentleman by the name of Don Ascke, who would drop off his salary, in cash, once a month in a paper bag by the back door behind the garbage dumpster. Mr. Fezzel also told authorities that he had no idea that any of the items in the warehouse were stolen. When Mr. Fezzel was informed as to the status of said artworks, he said, “It’s terrible when dishonest people steal works of art that have been previously stolen. As an art lover myself, I find it to be an insult to humanity. But at least the thieves have good taste. I think they took most of the best pieces.”

Although we are unable to verify this, our sources say that some of the art that was stolen includes works by Rembrandt, Picasso, Jerdon, Monet, Kavouklés, and Cezanne, among others.

When asked how he thought the owners would react to the terrible news, Mr. Fezzel said, “I’m not sure, but now that we have actual video of the heist, they can probably find a collector for it if they promote it as a genius performance piece or a work of NFT virtual art.”

Makes sense to us!

Editor’s Note:
The Daring Heist mentioned above is not to be confused with Derring Heisse, a sleepy suburb outside of Einbeck, in the northernmost part of central Germany. Nor is it to be confused with Darren Hayste, a retired plumber from Manchester now living as a hermit with eight other hermits in the Forest of Bowland in Lancashire, England.